The good example of Kozani (Greece) on biowaste management

When food is wasted, all of the resources that went into its production are lost – including precious natural resources such as water and fuel. Not only does it represent a missed opportunity to feed a growing world population, but it also has negative environmental and economic consequences.

Biowaste should not be considered as an useless item, instead it could be very useful in agriculture as it can be turned out into fertiliser (to valorise and use co-products and by-products), or could be used for energy recovery (biowaste release biogas) or in animal feed (using co-products that result from other industrial processes, such as oilseed meals, beet pulps and brewer’s grains). Former foodstuffs are foodstuffs which were manufactured with the intention of being sold on the human consumption market, but for commercial or logistical reasons are deviated to animal feed. 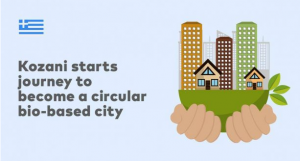 In a such context, Kozani is exploring the potential for creating new growth and employment through better biowaste management.

Kozani is the region’s capital of Western Macedonia, the only region in Greece without a coastline, where people come to ski not snorkel. The Western Macedonia has traditionally been reliant on mining and energy production. With the age of coal coming to an end however, authorities are focused on developing a green, circular bioeconomy in the region. Members of the recently launched ‘Kozani Biowaste Club’ will work together to revolutionise the Integrated Regional Waste Management System, making the city a circular economy pioneer in Greece. The Biowaste Club is managed locally by CluBE, the Cluster of Bioenergy and Environment of Western Macedonia. As in much of Europe, most organic waste in Kozani currently goes to landfill – a bad option for the environment and the economy. The Municipality of Kozani is determined to change this, however.

A pilot project collecting organic waste from 100 households was launched in 2016, in collaboration with the Waste Management company of Western Macedonia (DIADYMA). Due to its success, the scheme has been expanded, and last year over 50 tonnes were collected from more than 500 households. Organic waste is currently treated to produce compost, which is made available for use by residents. The Biowaste Club will support the Municipality to roll-out separate collection in pilot neighbourhoods across the city, and explore opportunities to transform biowaste into valuable products such as bioplastics and fertilisers. And all this through being a part of a wider EU movement.

DISCLAIMER
This webpage has been produced with the financial assistance of the European Union. The contents of the webpage are the sole responsibility of Public Enterprise KOMUNALEC Bitola and can in no way be taken to reflect the views of the European Union, the participating countries and the Managing Authority.